Plain through dovetailed joint is rarely used upon anything but the most expensive work, as it requires a high degree of skill to make economically.

It forms the strongest possible unreinforced joint for the corners of boxes, chests, etc.

Laying out and cutting the dovetails

In making a dovetailed joint, some woodworkers layout and cut the pin, a, first, which necessitates that the tails, b, should be marked and cut one at a time. Good results may be obtained by this method, but it is slow, and is rarely used upon practical work. The common method used by woodworkers is to saw the dovetails, b, first, and mark the pins by the tails. If two or more joints are to be dovetailed alike, the sides may be made into a bunch, and all sawed at once. 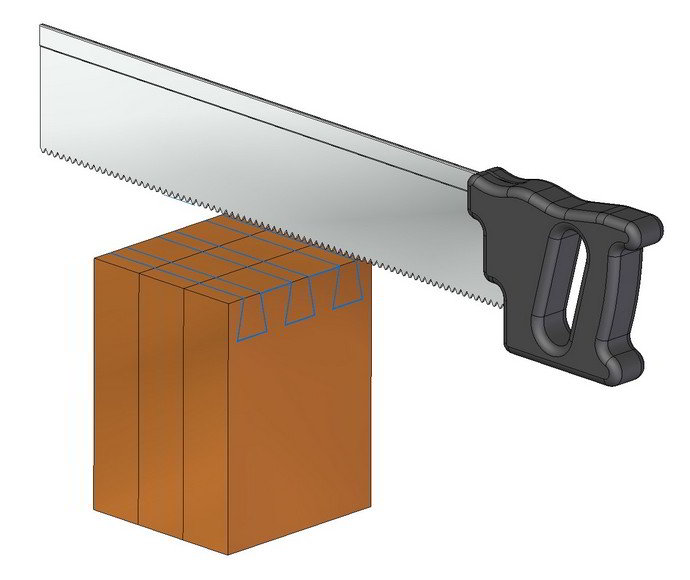 1. Make the ends to be dovetailed perfectly square and true.

2. Gauge upon each side from these ends, the distance, C, or the thickness of the piece to be dovetailed. It is very necessary to square the lines from the face-edge, otherwise the joints are likely to be open on one side or the other. 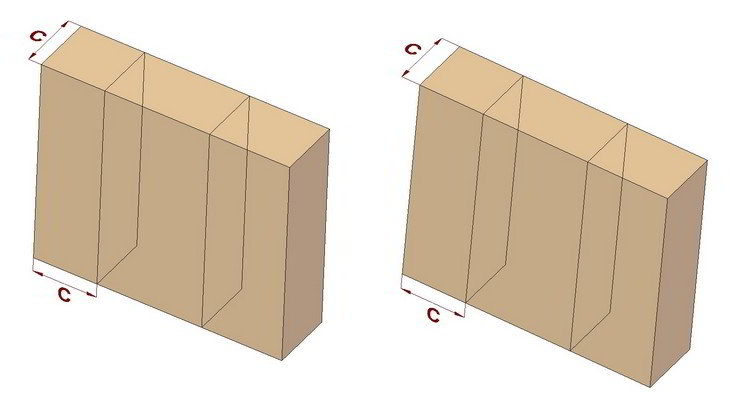 3. Place the dovetail piece, in the vise, end up, and face side toward the workman, and on its squared end lay off lines as mn. 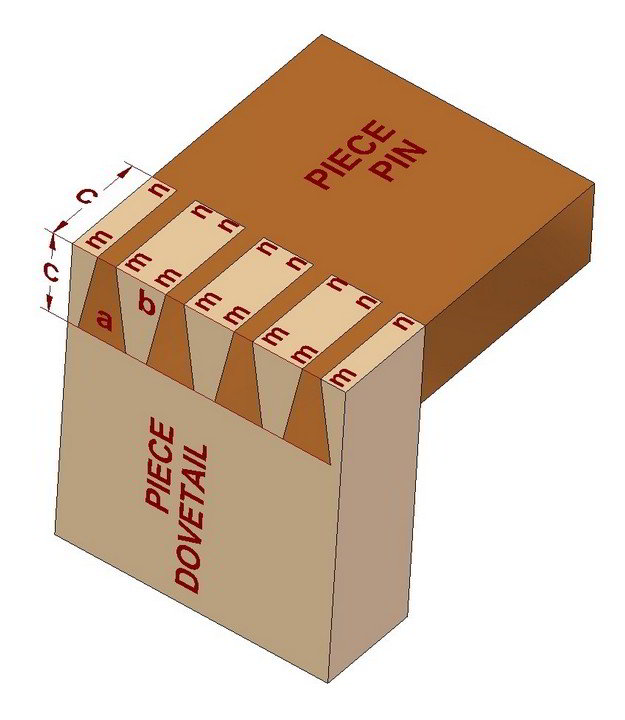 4. Having marked the lines mn, the slanting sides of the joints are marked with the knife along the sliding T bevel set to a certain angle. If the angle of the tail is too sharp, it is apt to be broken off when the pieces are driven together.

5. Saw with a backsaw, in every case leaving the line of the piece which is wanted.

6. Lay the pieces face down upon the bench, and with a chisel narrower than the bottom of the cut, make one cut, as at a. This will minimize the tendency of the chisel to push back, so that when the next cut is made upon the line d, the wood will break into cut a, as at b, instead of pushing the chisel back of line d, as at c, which will probably happen if cut a is omitted. 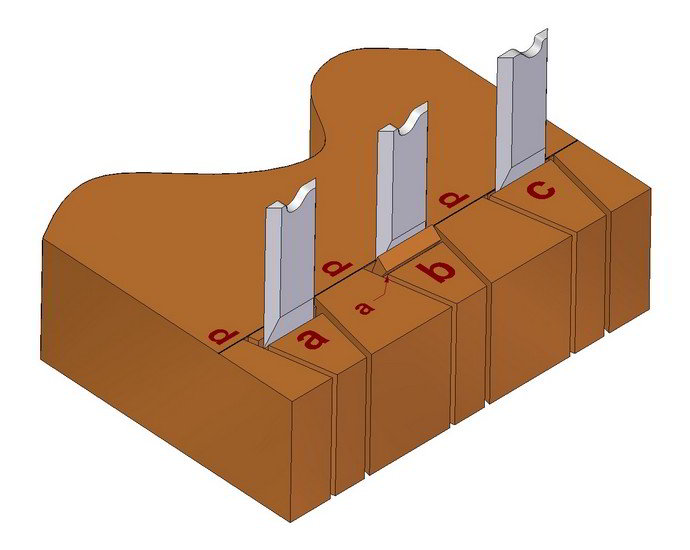 7. The gauge mark, d, at the bottom of the pin cut upon both sides should be kept perfectly straight, and the cut be made exactly to this line, as a straight piece of wood is to fit against it. The section of the cut should be similar to d, and half of it cut from each side, holding the chisel as shown by the try square at a, so as to cut under, which will allow the edges b, c to fit closely against the pin. The novice is more than likely to make a cut that will be full in the middle of the thickness of the board, shown by the dotted line at d, which will prevent the pin from making a good joint at b and c. 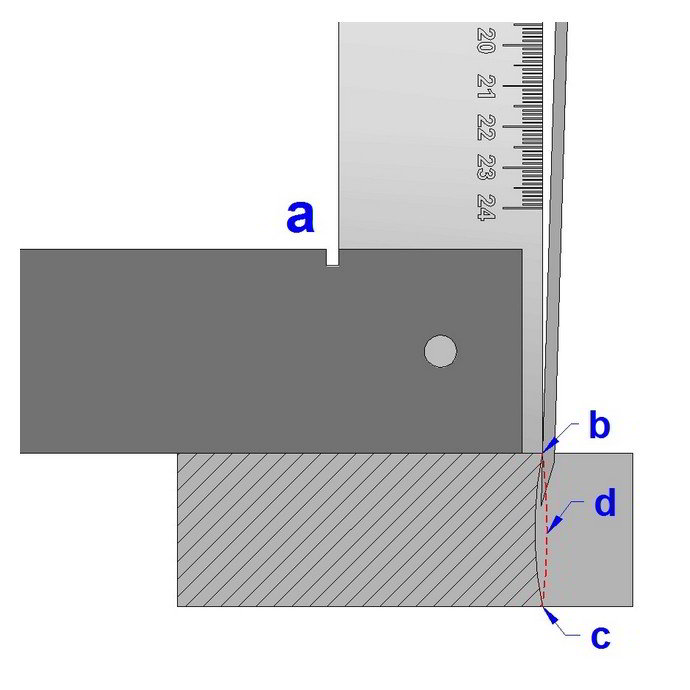 8. Turn the piece over, face up, and make the cut from that side; clean out the chips, or core.

Marking and cutting the pins

1. Place the dovetail piece, in the vise in a vertical position.

2. Place the pin piece upon the end of dovetail piece, as indicated. It is important that the mark d (which is the same as d in previous steps), should exactly coincide with the corner, or the back side, of pin piece. 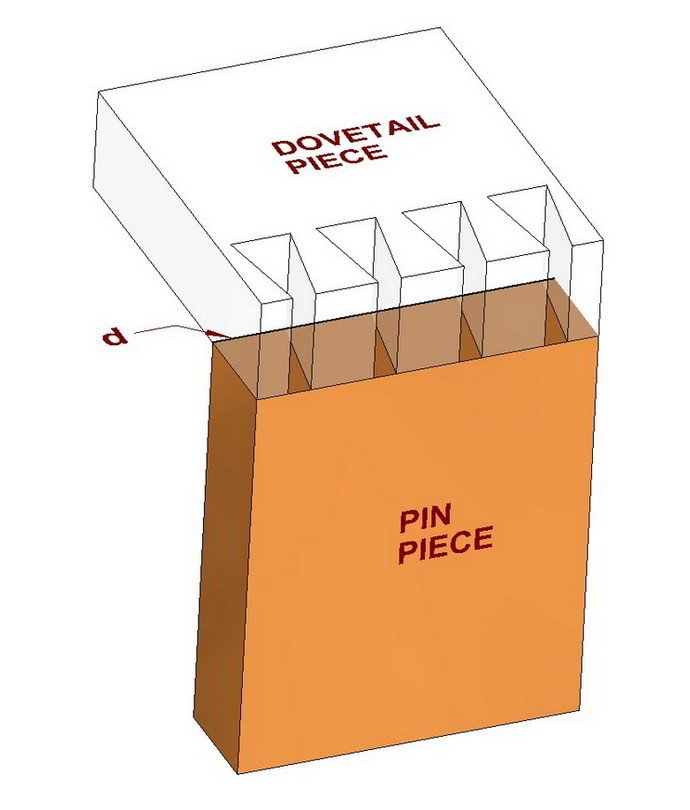 Hold the upper piece in this adjusted position, while with a knife or pencil you mark along the sides of the dovetails  on the top of the pin piece. The marks should appear like those of a. Mark the other ends in the same way. With try-square and knife mark from the ends of the lines a, down to the pencil-mark, as at b and c. 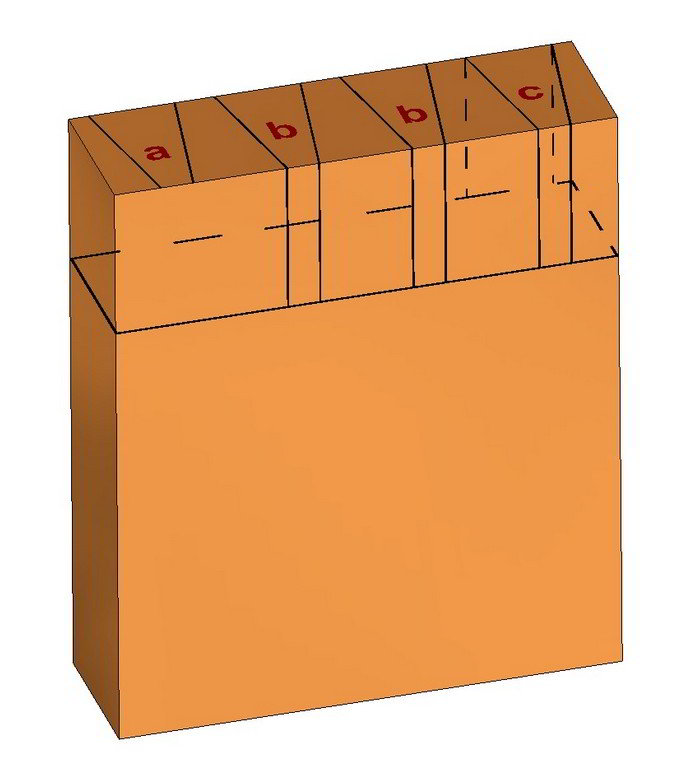 3. With backsaw, cut down to lines g, as shown by double lines, being careful that in every case the cut is made outside of m and n, or that these lines are left on the pin. 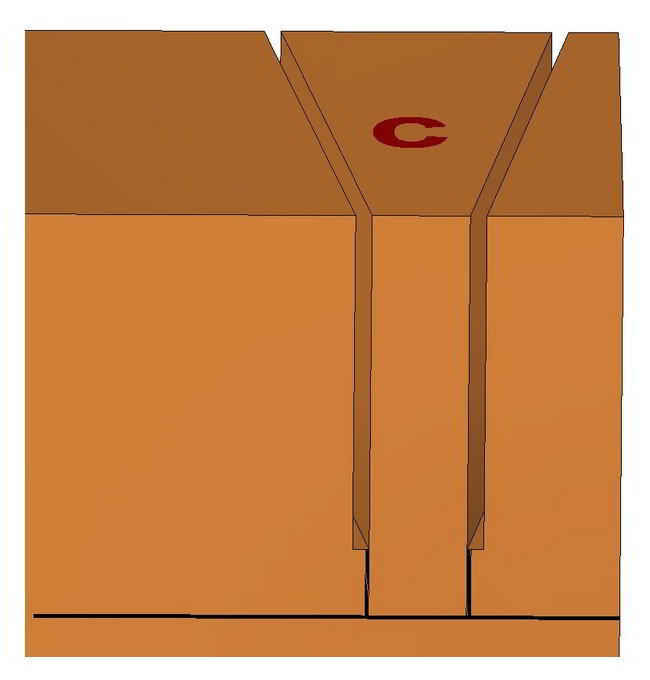 4. Turn the piece over in the vise so that the cuts p, g may be made in each edge. These should be made exactly to the line upon each surface of the cut, with a backsaw. This will cut out the corner, t. If the work has been accurately done, these corners should not be touched again. 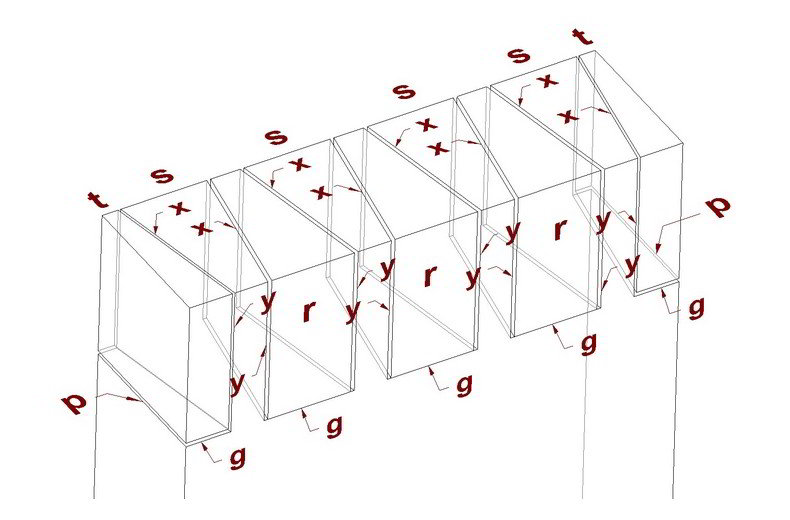 5. Clean out the spaces, r, with a chisel by the same method used in cutting the tails.

6. If the work has been done with sufficient accuracy, there will be no need of trimming either the pin or the tail to allow the two pieces to come together and make a perfect joint. To attain this accuracy should be the ambition of each beginners, as the skilful woodworker must be able to make dovetails rapidly, surely, and without trimming. In cutting the pins, the amateur is quite as likely to cut inside  as outside of the lines, thus making the pins too small; this tendency should be  guarded against, and the pins, s, left the exact size desired. In every case, the saw cut should be made with such care that chiselling or fitting will be unnecessary, as it is quite as likely to injure as to improve the dovetail joint.

7. The inside of both pieces should be smoothed and sandpapered before being   put together permanently; and care should be taken not to plane any off of the back side of the pins, or they may be too small. If the pins fit too closely, with a hammer bruise the corners of their ends a little, where they enter the space between the tails; this makes them a little smaller, but when they are glued together, the moisture of the glue will swell the pins to their normal size.  Glue the pieces together, being sure that the angle of the joint is square; apply the glue sparingly. If the work has been done accurately, the dovetail joint should be so tight that when it is set away for the glue to harden, it will hold itself together without the aid of hand screws; though if necessary, these may be used judiciously.