There are many DIY projects today that can be used to make 3D printers at home, and some of them can be found here.

These are mostly printers based on the RepRap 3D printer, and you can choose to either make one on your own or buy a kit and assemble the parts. What matters is that you can become the owner of a 3D printer by spending just a small amount of money; we have even come across an extruder plan to help you make the filament out of recycled plastic! 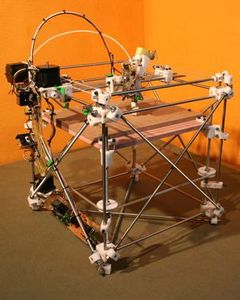 RepRap 1.0 "Darwin" is a rapid prototyping machine that is capable of making the majority of its own component parts. Instructions and all necessary data are available completely free under the GNU General Public Licence from this website to everyone.

As RepRap 1.0 "Darwin" copy itself, once you have one you can make others for your friends; or if they have one you can ask them to make one for you. Of course, you can also make as many as you want for yourself; the more you have, the faster you will be able to make other items. RepRap etiquette asks that you use your machine to make the parts for at least two more Darwins for other people at cost, as well as using it to make whatever you or anyone else on the internet can think up...

Darwin consists of a frame made from rods and printed parts. A flat build platform moves vertically in that frame, driven on screw threads by a stepper motor. At the top of the frame there are two write heads that move horizontally (driven by toothed belts and two more steppers) extruding a thin stream of molten plastic to form new layers on the build base. The machine prints layer by layer to form a solid object. The build base then moves one increment down, the second layer is extruded, and so on. There are two heads to allow a filler material to be laid down as well as the plastic. This filler is used to support overhanging parts of the objects being built, and is removed when the process is finished. 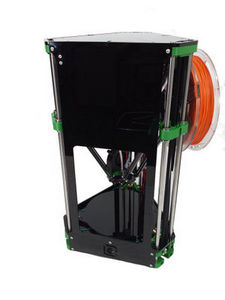 The RepRap Fisher has a 150mm diameter by 180mm height build volume, uses a bowden extruder and has a print resolution of 12.5um in all directions, it also has a micro SD card and USB and Ethernet connections allowing it to be connected to a network. The printer was praised for its ease of construction and low price and is only available in kit form. 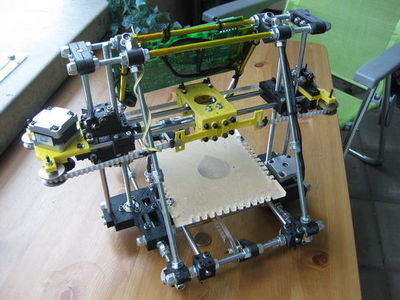 RepRap Version III "Huxley" is being developed on this and associated pages. It is based on Ed's original Mini-Mendel design, together with a lot of work already put in by ErikDeBruijn and others. Huxley is named, like all RepRaps, after a biologist: Thomas Henry Huxley.

To clarify, Huxley will be Mini-Mendel with some re-designed parts plus more documentation, defined integrated electronics (with alternatives, of course), and a selection of alternative firmware and host software configured to drive it. We will be integrating as much as possible of the work such as Brutis already done on Mini-Mendel.

The machine uses M6 threaded rods and M3 nuts and bolts (as opposed to the M8/M4 used on Mendel) and NEMA 14 Stepper Motors. The reprapped parts are about 30% of the volume of those for Mendel, which is to say it could reproduce three times faster.

Mendel can print itself, and so will Huxley. In addition, Mendel will be able to print Huxley, and Huxley will be able to print Mendel. We will continue Mendel development to turn it into a multi-material machine. Huxley will be a one-material machine, though we will probably also add a Pen Plotter so we can write etch-resist on PCBs and use an Oil Pen to facilitate separation of Support Material for overhangs.

The idea is to develop both Mendel and Huxley in parallel, with Huxley being as cut-down and minimal as possible, and Mendel being the machine with all the fancy capabilities. Huxley will be the fastest replicator. Mendel will be the most versatile. 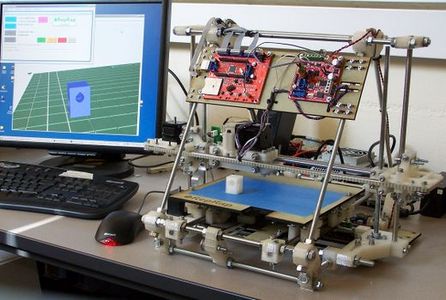 The machine on the right is the RepRap printer, which we call "Mendel" after the father of genetics. It's the second, improved version of RepRap: small enough to fit on your desk, but with a print volume large enough for you to make big things. The machine is made up of bits bought in from local suppliers or online, and parts which it can make for itself - all the translucent structural components you can see.

In the picture, behind the machine, you can see the RepRap software which you can use to print your thing. We give this, and the designs for the machine away, free - it's all open source (GPL 2). Though you do have to buy in some standard components from... well, whoever you want... which cost about €400. The idea of getting all the materials and building a machine yourself may seem daunting, but this area of the wiki is dedicated to making the whole process as easy as possible.

There are a number of instructional videos distributed through the Mendel documentation. These are also all gathered together in one place here. 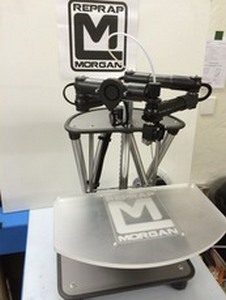 The RepRap Morgan is an open-source fused deposition modeling 3D printer. The Morgan is part of the RepRap project and has an unusual SCARA arm design. The first Morgan printer was designed by Quentin Harley, a South African engineer (working for Siemens at the time) at the House4Hack Makerspace in Centurion. The SCARA arm design was developed due to the lack of access to components of existing 3D printer designs in South Africa and their relatively high cost.

The Morgan name comes from the RepRap convention of naming printers after famous deceased biologists. The Morgan printers was named after Thomas Hunt Morgan. Their names were used in the development codenames for the first two generations of Morgan 3D Printers.

Morgan printers are now manufactured full-time by the inventor in a small workshop factory in the House4Hack makerspace. 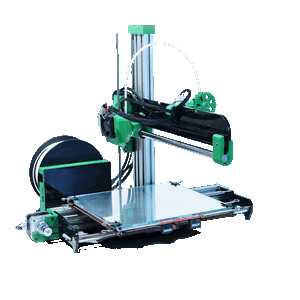 The RepRapPro Ormerod design is from RepRapPro. The machine is a fast to assemble, networked 3D printer with non-contact bed probe for full geometric compensation.

Its primary design goal is to offer a printer which is easy to expand in functionality, fast to replicate, and fast to assemble and to commission. This new model builds on the already established designs and technical advances which have undergone brisk development and heavy testing since the RepRap Project‘s inception in 2004. 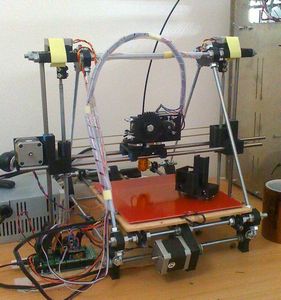 Prusa Mendel is the Ford Model T of 3D printers.

Like the Model T, the Prusa Mendel improves on a previous design by being more streamlined for manufacture. The Prusa Mendel is a simpler remix of the original Mendel. By default, it uses printed bushings instead of regular bearings, though options to substitute inexpensive lm8uu linear bearings or other types of bearings or bushings are available. The current version uses three 608 bearings in total, one for the X axis and two for the Y axis. The 624 bearings are gone altogether.

Prusa's main goal is to be the purest and simplest 3D printer you can build. 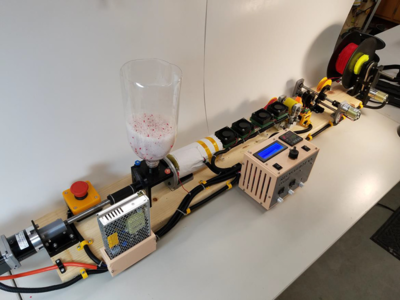 In order to assist researchers explore the full potential of distributed recycling of post-consumer polymer waste, this article describes a recyclebot, which is a waste plastic extruder capable of making commercial quality 3-D printing filament. The device design takes advantage of both the open source hardware methodology and the paradigm developed by the open source self-replicating rapid prototyper (RepRap) 3-D printer community. Specifically, this paper describes the design, fabrication and operation of a RepRapable Recyclebot, which refers to the Recyclebot’s ability to provide the filament needed to largely replicate the parts for the Recyclebot on any type of RepRap 3-D printer. The device costs less than $700 in materials and can be fabricated in about 24 h. Filament is produced at 0.4 kg/h using 0.24 kWh/kg with a diameter ±4.6%. Thus, filament can be manufactured from commercial pellets for <22% of commercial filament costs. In addition, it can fabricate recycled waste plastic into filament for 2.5 cents/kg, which is <1000X commercial filament costs. The system can fabricate filament from polymers with extrusion temperatures <250 °C and is thus capable of manufacturing custom filament over a wide range of thermopolymers and composites for material science studies of new materials and recyclability studies, as well as research on novel applications of fused filament based 3-D printing. 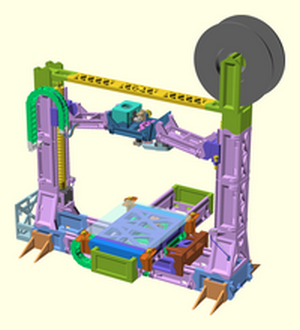 Snappy is an Open Source RepRap 3D printer designed by RevarBat from July 2014 to January 2018. It is a true RepRap, using very few non-printed parts. This design needs no belts, pulleys, metal rails, and almost no screws other than to mount parts to the motors. This means that you should be able to put one together for about $216, including the price of plastic to print parts. The entire thing snaps together, and you should be able to assemble it from parts in only a couple hours. The few required non-printable parts are available world wide from a variety of suppliers.

Snappy is an original design, created in OpenSCAD, so many individual design parameters can be altered to fit the end user's specific needs.