There are a large number of burr puzzles and all of them can be defined as an interlocking 3-dimensional puzzle composed of notched rods of wood.

Burr puzzles are nowadays one of the most common variants of construction puzzles. Most often they are known as burr puzzles, but also are known as Chinese puzzles, Chinese cross puzzles, interlocking puzzles and notched stick puzzles.

The first written evidence of burr puzzles trace to the early 19th century, but it is assumed that they were known in Europe and Asia before. The Chinese puzzles is likely titled in the early 20th century because at that time began a mass production in China and many of them were imported to Europe and America. It is not exactly known where and when the burr puzzles were created. Throughout history, in China wooden structures and furniture were made without the use of fasteners and glue. In these constructions, the structural elements were tied to each other by woodworking joints. There is a great similarity between the design of burr puzzles and traditional Chinese joinery and probably the burr puzzles were inspired by similar carpenter’s techniques.

In the late 19th and early 20th century in America has become popular to patent a variety of products, and at that time a large number of burr puzzles were patented. Most of them are just variations of puzzles that are similar to each other, but among them there are a number of puzzles that led to the formation of various types of original burr puzzles. For example, around 1920, were patented the burr puzzles with internal voids. Until then the burr puzzle did not have an empty space in the center, so they were interesting only to assemble, because dismantling was reduced to drawing the key piece.

By producing burr puzzles with internal voids, two-way puzzles were created which are interesting to assemble and disassemble, because for disassembling   several pieces must be shifted in order to free one piece. These puzzles are securely locked by an internal system of moving blocks.

There are a few terms that need definition to better understand the burr puzzles. - BURR PUZZLE TERMINOLOGY

The most common types of burr puzzles consist of at least three notched rods that intersect each other at right angles and which are arranged so that in the inside core there is no empty space. When Burr puzzle assembled all the notches are hidden inside the core, and the puzzle seems to be completely symmetrical. In addition to forms where the rods cross each other at right angles, burr puzzles may have a variety of other forms. There are a number of burr puzzles with shapes of furniture, animals, 3D geometric forms and the like.

There are 3 types of rods: without notches, with simple notches and with complicated notches. Complicated notches can be carved with a chisel, while simple notches, can be made with a saw or a dado blade. The rods are usually blocks of equal length with a square cross-section and are usually made ​​as a 6 x 2 x 2 unit rod of wood. Rods have a number of cutouts which are obtained by removing cube shaped volumes of wood, each with sides equal to half the width of the bar. 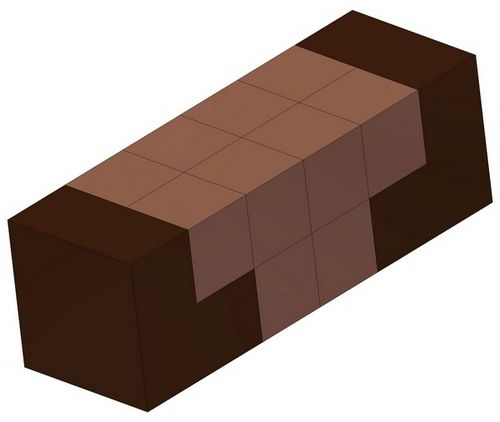 If we assume that the rod has square cross-section dimensions of 2x2, then all notches are one unit deep and one unit wide.

If the burr puzzle has internal voids, there is no need for the lock piece, and to disassemble this puzzle several pieces must be shifted.

The Burr puzzles are divided into categories in a variety of ways:

Over time, a large number of puzzles emerged similar to burr puzzles, but  by definition of burr puzzles , they do not fall into this group. Some examples of these puzzles are Burr puzzles with pins and holes, Knot puzzle, Diagonal burrs ...